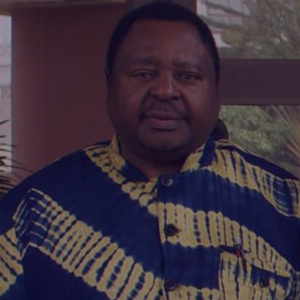 Prof. Beban Sammy Chumbow is Emeritus Professor.He has served as Rector/Vice Chancellor for the Universities of Yaounde 1,Ngaoundere, and Dschang in Cameroon.Professor Chumbow is a leading linguist and has published extensively on various aspects of language development and nation-building in Africa.

Beban Sammy Chumbow (BSC), Licencié, Agrégé d’Enseignement Moyen du Degré Supérieur (Lovanium), Ph.D (Indiana-USA) has been Professor of Linguistics (since 1982) with specialization in Generative Phonology& Applied Linguistics while research activities also includes Language Planning and Science& Development. He is currently Pro Chancellor (Chair of the Governing Council) of the University of Dschang, a State University of Cameroon and Emeritus Professor at the University of Yaounde 1 in Cameroon, First Vice President of the Cameroon Academy of Sciences (since 2005), Fellow of the New York Academy of Sciences and President of the African Academy of Languages (ACALAN, an institution of the African Union) and most recently, Vice President of the African Science, Research and Innovation Council (ASRIC) – African Union, in charge of Resource Mobilization.

His academic and professional activities (in 2019), span over 48 years of teaching and research at the university level (including university management) in the USA (1971-1976), Nigeria (1976-1986) and Cameroon (1986 – the present 2019). This was carried out concomitantly with regular academic activities as ‘Visiting professor’ and responsibility for conferences, theses supervision and examination, and research or evaluation of development projects in several countries of the world including Britain, Canada, France ,Germany, Italy, Belgium, Romania, Switzerland., USA, Sweden, Norway, Denmark, Japan, India, etc. and most countries of Africa. He was member of the Executive Board of the Association of African Universities (AAU), former member of Council of the Association of Commonwealth Universities (ACU), Ancien membre du Conseil Scientifique de l’Agence Universitaire de la Francophonie (AUF), member of the Eight –member Nucleus of the African Academy of Languages (ACALAN) –an organ of the African Union, and member of the Scientific Committee of CODESRIA among others. He is cited as ‘Man of the year 2000’ and in the book “One thousand scholars of the twentieth Century” by the Cambridge Bibliographical Society as well as in ‘Who is who in the Francophonie’ (“Qui fait la Francophonie?” Paris 2005); He is also cited and conferred the ‘Presidential Award’ by the American Biographical Society for contributions to Linguistics and Higher Education, etc. He served as Member of the Board of Directors of the consortium Language in Contact and Conflict in Africa (LiCCA) etc.

He is solicited to serve as consultant for several government and international organizations such as the African Union (AU), Association of Canadian Colleges and Universities (ACCU), UNESCO, UNECA, AAU, ACU, AUF, etc. He has been a regular key-note speaker in international conferences on issues of language, Linguistics and Research and Development (R&D) as well as matters of Higher Education Management since 1985.